In the economies of developing nations, the aquatic products area does not only lead to the improvement of food stability and livelihoods, but it also offers employment opportunities and the attainment of foreign currency through exports. It is considered to be important from a variety of perspectives.

Also, in developing countries, in order to escape from poverty environmental destruction takes place, leading to a temporary improvement in standards of living. However, when viewing matters from a long-term perspective, a vicious cycle of repeated deterioration of the economy and impoverishment can be observed. In order to contribute to the solution of this issue, projects regarding sustainable use of resources and protection of biodiversity are conducted.

For INTEM Consulting, Inc. aquatic products development/environment is one of our strengths. Toward the aim of sustainable use of resources, we are conducting technical knowhow transfers related to coastal fishing, aquaculture, aquatic products processing and biodiversity and wetlands environment conservation. 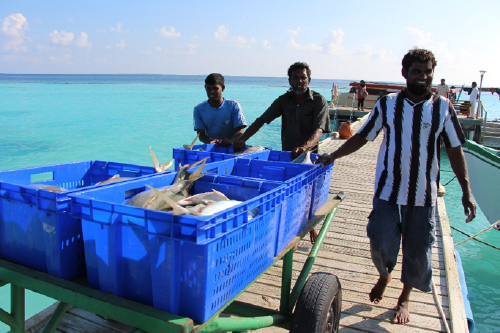 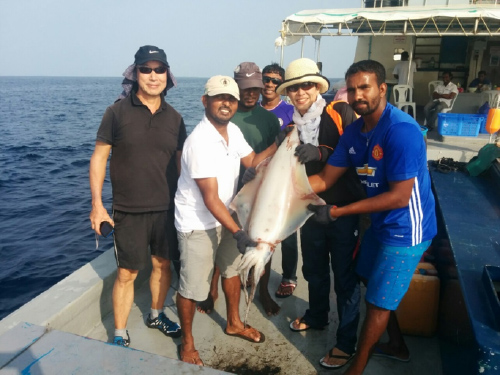 There are many islands floating in the Indian Ocean with beautiful coral reefs. While the Maldives is known as one of the most famous resort areas in the world, it is also an area where the fishing industry has long thrived. While skipjack tuna and yellowfin tuna are especially important aquatic resources, in recent years low catch volumes have been a source of worry. The Maldives has faced the dual issues of the promotion and the sustainable development of the aquaculture industry.

Through the creation of the long-term development plan of the Maldives aquaculture industry, we have helped to find a solution to the above issues. In the process of creating the plan, we realized added value through the keeping tuna freshness, creating a guideline for reef fisheries, sea cucumber aquaculture development, and processed aquatic products quality control, etc. On site, we also worked toward the solution of issues faced on the front lines. Concerning the fishing industry development of what had been an unused resource: the diamondback squid, it shows signs of taking root as a new fishing industry in the Maldives. It isn’t widely known, but in the history of the development of the Maldives aquaculture industry, the influence of Japan has actually been quite large. This might be a case of Japan once again adding its name to this history.

Project Name: Project for Extension of Inland Aquaculture in Benin 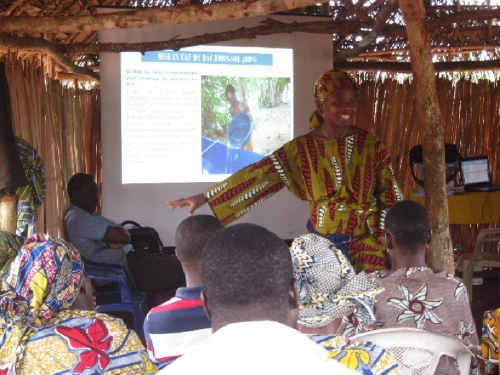 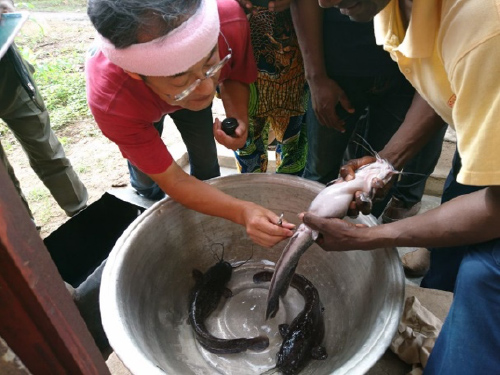 Benin faces the Gulf of Guinea and is a long and narrow country running north to south. As it faces the ocean, it has fish and other resources. However, due to overuse, its fish catch volume is on a declining trend, and is insufficient to satisfy domestic demand. Thus, Benin is dependent on aquatic product imports. In order to solve this problem, a project was conducted to utilize the expansive freshwater area in its interior to disseminate fish aquaculture.

In Phase 1, the “farmer to farmer” extension model that was demonstrated in Asia, beginning in Cambodia, and that uses a different style of agriculture and target fish species, was applied for the first time in Africa, a region with different culture and customs. As a result, at the time of project completion, we achieved the significant result that in the 7 southern target provinces, the number of aquaculture farmers were approximately 2.5 times the starting number, and the production volume had grown by approximately 3 times.

In Phase 2, based on the achievements of Phase 1, the target area was extended further into the interior, and dissemination of aquaculture was expanded nationwide. A further result of this was that as technology exchange countries, the project knowledge was shared with 6 neighboring countries, (Angola, Gabon, Cameroon, The Republic of Congo and The Democratic Republic of Congo, Togo), and it is highly regarded as contributing to the development of aquaculture in central and western Africa. 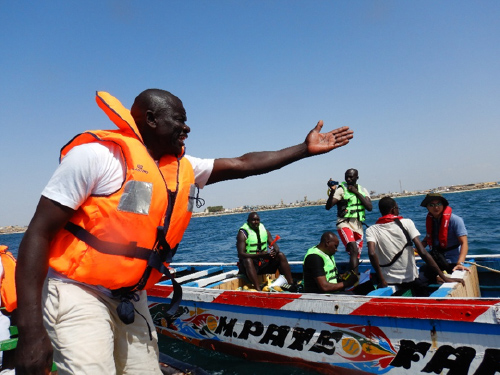 Senegal is a major fishing country in which 17% of the population is involved in the fisheries industry. However, the majority of these are tiny scale fishers operating wooden boats, and they face various problems. Especially, the low level of fishing management skill and the frequent occurrence of marine accidents are considered to be problems. Although there are many fishers who fishers who aim to achieve sustainable sue and are involved in resource management, illegal fishing operation that doesn’t follow the rules (IUU fishing*) also has deep roots, and the government has not taken sufficient countermeasures. Also, due to problems with fishing boat structures and engines, and safety devices, etc., in 2017 the number of fatalities due to marine accidents reading 140 persons. * Illegal, Unreported & Unregulated fishing

IUU and marine accidents have become a common worldwide problem, and in recent years have been seen as important areas in Japan’s aid policy. This survey investigates the status and issues of IUU fishing and marine accidents in Senegal, which is a central country in western Africa. In addition, concerning the concrete technical issues, demonstrations were conducted through a pilot program, and recommendations were on the direction of aid from a practical perspective. 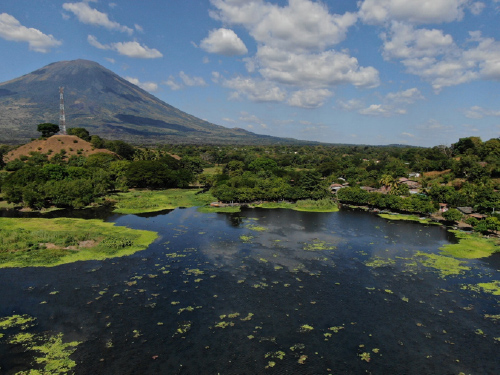 El Salvador is located in the heart of Central America, and it occupies a key position in transportation and distribution. However, its development was delayed by the influence of a long civil war. Development was especially delayed in the eastern region, which is the site of the project. The income disparity in the eastern region stands out, and awareness concerning the preservation of the ecosystem is not high. There are 7 registered Ramsar Convention sites in El Salvador. This project aimed at improving the wetland management ability of El Salvador’s Ministry of Environment and Natural Resources.

1. Wetland ecosystem and wildlife habitat preservation
2. Creation of wetland value through environmental education/communication
3. Utilization of ecosystems for disaster prevention/fire prevention, through the optimization of use of agricultural lands
4. Optimization of the sugar cane cultivation method aiming to achieve wise use

Going forward, we will use the results of this activity as a model to be disseminated to other wetlands. Through this activity we will improve the wetland management ability of the Ministry of Environment and Natural Resources Cambodian citizens consume 52.5kgs of fish annual, placing them 4th in the world. There was a strong interest in using paddy fields, canals and ponds to conduct small scale aquaculture. However, farmers’ practice of aquaculture was hindered by their lack of knowhow and fish seeds for cultivation. This project was aquaculture technology conducted with a low monetary investment by utilizing existing rice fields and ponds and by using secondary agricultural products as feed. In addition, fish seed production technology was introduced using a simple incubator facility, and emphasis was placed on cultivating fish seed production farmers. The project aimed to disseminate aquaculture techniques on a farmer to farmer basis by using the approach of training sessions held between farmers that were suited to the conditions of each village. During the 2 periods of Phase 1 (February 2005 –February 2010), and Phase 2 (March 2011- March 2015), it was possible to cultivate over 9000 households, and 3000 households, respectively. The project not only achieved the obtainment of food, improvement of nutrition, and improvement of household finances in Cambodian villages, but also demonstrated that technology transfer between farming households was one effective method of promoting village development.